Our beginner-level appellate seminar, Appellate Practice 101: The Nuts and Bolts, focuses on teaching the attorney new to appeals how to deal with an appeal from start to finish and providing a refresher for those who have not handled an appeal in quite a while.  The program covers both codes and case law, as well as providing critical insight and strategies that will help you with your next appeal.

You cannot get this level of advice and strategy at one seminar anywhere else.

This is a terrific course for new appellate practitioners, attorneys who find themselves with a new appeal, those needing a refresher course in appeals and litigators wanting to expand their skills and practice area. This program is well tested and always receives excellent evaluations.

Learn how to avoid common mistakes, what you must do to succeed, and interact with a stellar panel for strategy and advice about your upcoming appeals.

Intro: Should You Appeal?

Making and Preserving the Record in the Trial Court

Staying Judgments and Orders, Including Bonding

Perfecting the Appeal and Other Preliminary Matters

Settlement in the 7th Circuit and State Courts

Interlocutory Appeals by Right and by Permission

Practice in the 7th Circuit Compared with the State Appellate Courts

“I got a very thorough overview of appellate procedure and practice.” – Christine Beaderstadt, Esq.

“Good program. I found this conference to be very helpful to an appellate practice – it would also be good for those who only do trial work to know what is necessary to present a case/issue for appeal. I was never bored.”

“Tons of writing tips that I will utilize in my practice.”

“The strongest part of the seminar was where the speakers spoke to the practical application of the slides.”

“I got a very thorough overview of appellate procedure and practice. Overall, I really appreciated the conversational tone among the panelists.”

Judge Jesse Reyes has been a member of the judiciary since December, 1997, serving both as an associate and elected judge of the Circuit Court of Cook County. Judge Reyes was elected to the Appellate Court in November, 2012. Judge Reyes received his B.A. degree from the University of Illinois at Chicago and his J.D. degree from the John Marshall Law School.

Patricia S. Spratt was appointed by the Illinois Supreme Court as a Judge for the Circuit Court of Cook County as of September 8th, 2015.

Prior to her appointment, she had a successful litigation practice with a focus on appeals and commercial and business litigation. Prior to joining private practice, Ms. Spratt clerked for then Chief Judge William J. Bauer of the U.S. Seventh Circuit Court of Appeals. Ms. Spratt has also taught Appellate Advocacy at Loyola University, where she previously received her law degree and served as Editor for the Loyola University of Chicago Law Journal. 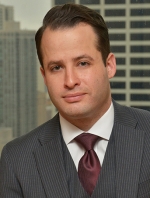 Jonathan B. Amarilio focuses his practice in civil appellate litigation and critical motion practice and has been involved in numerous high profile cases. He regularly represents individuals, small businesses, state and local governments, and Fortune 500 companies before state and federal appellate courts, primarily the Illinois Appellate Court, the Illinois Supreme Court and the United States Court of Appeals for the Seventh Circuit. Jonathan has also served as a Special Assistant Attorney General for the State of Illinois and as a Special Assistant Corporation Counsel for the City of Chicago in a number of matters.

Jonathan is a contributor to the Illinois Appellate Lawyer Association’s blog “The Brief” on topics such as recent rule changes, developments in appellate law and other issues of interest to appellate practitioners.

A highly-skilled civil, criminal, and appellate litigator, Joel Bertocchi handles appeals in state and federal courts and represents clients in connection with criminal and regulatory investigations and proceedings, providing counsel on compliance policies and related issues. He has argued cases in the U.S. Supreme Court and multiple federal Circuits and state appellate courts, and served as Illinois’ Solicitor General, the chief appellate lawyer for the State. A former federal prosecutor, he conducts internal investigations in all areas, including corporate governance and employee misconduct, and represents defendants and witnesses in criminal investigations and prosecutions.

Joel also strategically advises clients on the application of complex statutes and regulatory issues, including private and public corruption statutes, the Racketeer Influenced and Corrupt Organizations Act (RICO), and fraud.

In his legal career, Mr. Castiglione has worked in both the private and the public sector. In 1987, Mr. Castiglione joined the firm of Joyce & Kubasiak, P.C. as an associate attorney and practiced general civil litigation. In 1994, Mr. Castiglione joined the Civil Actions Bureau of the Cook County State’s Attorney’s office. In this position, Mr. Castiglione concentrated his practice in governmental, commercial, tax, labor, telecommunications, contract procurement and civil rights litigation with an emphasis in appellate practice, class actions, federal and state constitutional claims and cases involving preliminary and permanent injunctive relief. Mr. Castiglione has litigated cases in the circuit courts in Cook, DuPage and Lake Counties and the United States District Court for the Northern District of Illinois and has argued appeals in the Illinois Appellate Court, the Illinois Supreme Court, the United States Court of Appeals for the Seventh Circuit and the United States Supreme Court.

Scott specializes in civil appeals, focusing on civil appellate litigation in the state and federal reviewing courts. He has written appellate briefs and presented oral arguments in every reviewing court in Illinois and Wisconsin. Scott’s expertise in appellate matters extends to trial-level work, and he often counsels clients and the firm’s trial attorneys in developing and litigating cases in the lower courts, especially on interlocutory appeals and issues that are likely to arise on appeal. He frequently writes posttrial motions, or responses to such motions filed by adversaries, in anticipation of the appeals that often follow. Scott has also litigated issues of personal jurisdiction on appeal, successfully arguing in several cases that out-of-state defendants were not subject to the jurisdiction of the Illinois courts.

Nancy Jack currently serves as a law clerk to Illinois Supreme Court Justice Charles E. Freeman and has over 18 years of appellate experience.  She has also served as a law clerk for an Illinois Appellate Court justice and as a research attorney at the Illinois Appellate Court.  Ms. Jack is experienced in both civil and criminal appellate law and has worked on cases involving a wide range of appellate issues including constitutional law, statutory interpretation, criminal and civil procedure, and administrative law.

Ms. Jack is an adjunct law professor and teaches an appellate advocacy class where students write an appellate brief and give an oral argument.  She also serves as a member of the Board of Directors of the Appellate Lawyers Association and as a Co-Chair of its Moot Court Committee. Ms. Jack earned her J.D. from the John Marshall Law School where she was a member of the Dean’s list, and earned her B.A. from the University of Iowa.  She is licensed to practice in Illinois.

Michael A. Scodro is a partner in the Supreme Court and Appellate Practice at Mayer Brown LLP in Chicago and teaches a seminar on the U.S. Supreme Court as a Lecturer in Law at the University of Chicago Law School. From 2007-2014, he served as the Illinois Solicitor General.

After graduating from Yale Law School, Michael served as a law clerk to the Honorable José A. Cabranes of the U.S. Court of Appeals for the Second Circuit and the Honorable Sandra Day O’Connor of the U.S. Supreme Court.

IL General: This program is approved for 6.5 units of general CLE in Illinois through May 9, 2020.